Blog The 10 Most Beautiful Waterfalls in Iceland

Iceland is famous for its unspoiled nature, extreme weather, horses, Northern Lights, and hot springs. But did you know that there are more than 10,000 waterfalls in Iceland? The island is predestined for waterfalls, because of melting glaciers in summer, and frequent snow and rain in autumn and winter. As it’s impossible to visit even a third of the waterfalls, we made a list of the most beautiful and famous ones you should visit, when in Iceland. 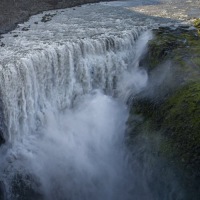 Dettifoss: Dettifoss = (loosely translated as) the collapsing waterfall is located in North Iceland (ca. 150km from Akureyri) and is known for being the most powerful waterfall in Europe. It is 45m high and 100m wide, and even it’s not the prettiest one, it’s more than impressive to see 500m³ of water rushing down into the deep per second. The mass of water feeding Dettifoss comes from the glacier river Jökulsá á Fjöllum, which sprung from Vatnajökull glacier, the greatest ice cap in Europe. Interesting fact: Dettifoss was shown in cinemas all over the world in the movies Prometheus (2012), and Oblivion (2013). 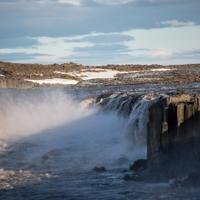 Selfoss: Selfoss is located in Jökulsárgljúfur canyon in North Iceland, only 1km south of its big sister Dettifoss. It is only 11m high, but 110m wide! Although it doesn’t get as much attention as Dettifoss, it is still worth a visit! Like Dettifoss, it is also fed from the glacier river Jökulsá á Fjöllum (as mentioned above). Be careful when you visit this powerful waterfall and watch out for slippery rocks! Also: don’t confuse the waterfall with the town Selfoss. ;) 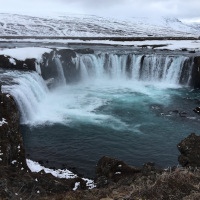 Godafoss: Godafoss = the waterfall of the gods is known to be one of the prettiest waterfalls in Iceland. It is 12m high and 30m wide, and also located in North Iceland, near the Mývatn area. According to a legend, the beautiful waterfall got its name from the lawspeaker Þorgeir Ljósvetningagoð in the year 999 or 1000.  Þorgeir made Christianity the official religion in Iceland. It is said that when he came back from the national Icelandic parliament, he threw all his idols of Norse gods into the waterfall, and that’s how it got its name. 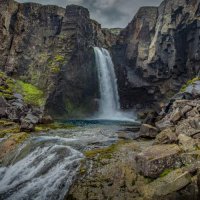 Folaldafoss: Folaldafoss is one of the lesser-known waterfalls in East Iceland, and you can visit it from Öxi (a mountain pass between Skriddalur and Berufjörður, which you should only drive on with a 4x4 vehicle). Folaldafoss falls about 16m deep into the river Berufjarðará. It is very nice to look at, and the scenery around it is simply stunning! 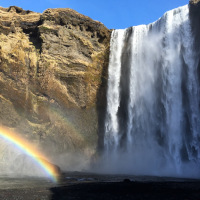 Skógafoss: Skógafoss = the forest waterfall is one of the biggest ones in Iceland. It’s 60m high and 25m wide, located 150km east of Reykjavik. What makes it special: you can walk up the stairs next to it, and enjoy a fantastic view of the beautiful surroundings and the waterfall itself. On sunny days, you will be able to witness a magnificent rainbow, sometimes even two. You can easily access the waterfall on a self-drive trip along the Ring Road. According to a legend, the first Viking settler in that area, Þrasi Þórólfsson, hid a treasure of gold in a cave behind it. Years later, it was found by locals, who were only able to grab the handle of the treasure chest, before it disappeared. It is said that the handle was given to a local church, and put on its front door. Today it is displayed at the Skógar Museum. 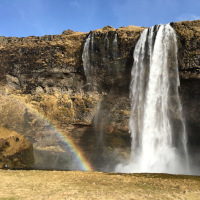 Seljalandsfoss: Seljalandsfoss is another beautiful waterfall in South Iceland that is worth a visit if you’re travelling along Iceland’s famous Route 1, the Ring Road. It is 60m high, and you can even walk behind it! But don’t forget to wear waterproof clothes, as you might get quite wet. Again, you will be able to see beautiful rainbows here on sunny days. Good to know: during the winter months, you might not be allowed to walk behind Seljalandsfoss, as it is too dangerous, but don’t be disappointed, it’s for your own good and still worth a visit! 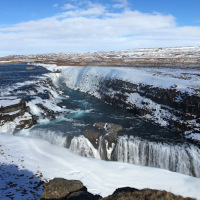 Gullfoss: Gullfoss = the golden waterfall is part of the famous Golden Circle (Iceland’s most popular tourist tour, which also takes you to the active Geysir Strokkur and the Thingvellir National Park). The waterfall (also located in South Iceland), drops down 32m in two stages, into a small canyon, with its water coming from the powerful glacier river Hvíta. During the summertime, ca. 140m³ of water thunder down the waterfall per second. You’ll most likely be able to walk close to mighty Gullfoss, but always keep in mind to stay behind the fence, and be prepared to get wet. Thanks to Sigríður Tómasdóttir, we are still able to admire the beauty of Gullfoss today. She fought in a legal battle against an English businessman at the beginning of the last century, who wanted to build a hydroelectric plant next to the waterfall, to use its energy. The battle became so difficult that Sigríður threatened to throw herself into the waterfall if construction began. 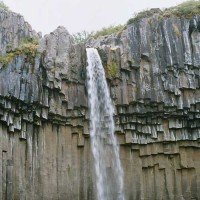 Svartifoss: Svartifoss = the black waterfall is really one of a kind, as its water falls down black basalt columns that gave it its name. The columns are formed when lava flows from a volcanic eruption, and contraction forces are building up, so when the lava cools down, it’ll have a hexagonal shape. The 20m high waterfall is located in Skaftafell National Park (in southeast Iceland), which belongs to Vatnajökull National Park, which has been approved as UNESCO World Heritage since 2019. 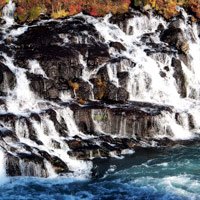 Hraunfossar: Hraunfossar = the lava falls, got their name because they look like they are coming right out of the Hallmundarhraun lava field that shaped after an eruption of one of the subglacial volcanoes of the Langjökull glacier. The waterfalls, located in West Iceland, in the Borgarfjörður district, are like a collection of a lot of small and big streams, stretching over a distance of 900m. That is also why they look especially spectacular and beautiful, even more so, since the water of Hraunfossar that flows into the Hvítá river looks turquoise or even milky white. Good to know: Hraunfossar is located near another nice waterfall: Barnafoss = the children’s fall. 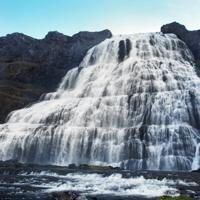 Dynjandi: Dynjandi waterfall = the thunderous waterfall (also known as Fjallfoss = the mountain fall), is the highlight of the Westfjords, as it resembles a wedding cake or bride’s train, and really is just as beautiful and unique! For many people, it’s the most beautiful waterfall in Iceland, and that’s why it’s often called the jewel of the Westfjords. It’s 100m high, 30m wide at the top, and 60m wide at the bottom. The closer you’ll get the more majestic it’ll be!

Last, but not least: during the winter months, not all waterfalls might be accessible, but if you visit some of them, it’s a special delight to see them frozen, although a few might never freeze, as they are fed by a hot spring. Make sure to bring a waterproof camera and wear rain gear, so you don’t get wet or start freezing when taking pictures, and of course, always be careful, mind your steps and have fun!

Need inspiration for your next round trip to Iceland? Read more here.