Iceland has a cause for celebration: Vatnajökull National Park has officially been approved as a UNESCO World Heritage site. The Ministry for the Environment and Natural Resources and the Ministry of Education, Science and Culture made the decision public on the 5th of July, 2019. With this decision, Vatnajökull National Park will be Iceland’s third site to be featured on the World Heritage List. The other two on the list are Thingvellir National Park, which became a world heritage site in 2004, and the volcanic island Surtsey in 2008.

The UNESCO World Heritage Committee met in Baku, Azerbaijan, when it decided to add the park to the heritage list, arguing that Vatnajökull is of exceptional value to the world, due to its incredible nature that needs to be protected and preserved through the legacy status. 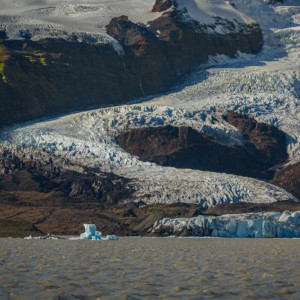 The Vatnajökull national park opened on July 7th, 2008, and includes the entire Vatnajökull glacier area and the Skaftafell and Jökulsárgljúfur national parks, and nearly covers 14% of Iceland. Its ice cap is 7,700 km2 big (2017) and covers 8% of Iceland’s total surface. By volume, it’s the largest ice cap in Europe, and the thickest part of the cap is 950m! What many people don’t know is that the cap also covers 7 active central volcanoes, as well as glacial troughs and valleys. The mix of glaciers, volcanoes, rivers, and valleys that coexist in the area and the geothermal activities in the park are what make it so unique that it has been approved as a world heritage site now.

Of course, the ice cap of the Vatnajökull national park is very sensitive to climate change and therefore serves as an important source for scientific research. Every year, various expeditions are carried out in the park and provide researchers and the Icelandic Glaciological Society with significant information about geological, biological, and glaciological changes.

For tourists, it’s always an amazing experience to visit the park and its distinctive natural landscape. If you get the chance, go hiking or camping in the park, but always respect the park rules.