Besides the famous Ring Road and the Golden Circle in the southwest of Iceland, there is another route in the north of the country that connects the most famous places and breath-taking natural wonders of the region: the Diamond Circle. In this blog article, we show you where the route leads and which stops on the Diamond Circle should not be missed.

Roundtrip in the north of Iceland

The Diamond Circle, or Demantshringurinn in Icelandic, is a great and popular new itinerary in the north of Iceland. It covers 250 kilometres and passes some of the most spectacular places on the island. The Diamond Circle's most famous sights include the Goðafoss waterfall, the harbour town of Húsavík, the picturesque Ásbyrgi Gorge, the Dettifoss waterfall, and finally the Mývatn Nature Bath and Lake Mývatn.
Due to its location and distance from Reykjavík, this itinerary is less known and also less visited compared to the Golden Circle, which is an absolute miss considering the unique landscape of the region. So if you're in the mood for unforgettable excursions and you are travelling on the Ring Road, this is the perfect opportunity to stop by. 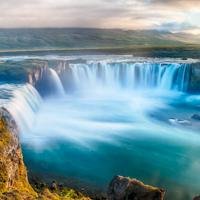 At 30 metres wide and 12 metres high, Goðafoss is one of the largest and most famous waterfalls in all of Iceland. It is fed by the river Skjálfandafljót, which flows through a 7,000-year-old lava field from the volcano Trölladyngja. Locals also call the waterfall the Waterfall of the Gods, because legend has it that when Iceland became Christian, the law speaker Þorgeir Ljósvetningagoði threw the Norse statues of the gods into the waterfall.
There are two ways to get close to the waterfall: From the west, you can simply walk from the car park to the river and the waterfall, and if you are coming from the east, you can follow a path from the service house in Fosshóll to the nearby waterfall.

The whale capital of Iceland - Húsavik 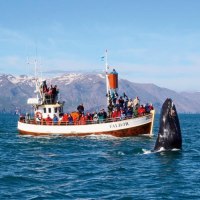 Iceland's oldest city is not only known for its many whale-watching events, but also for a connection to the Eurovision Song Contest in 2020, as Húsavik is the main setting for the film "Eurovision Song Contest: The Story of Fire and Saga". Húsavik was once the most important whaling port in the north of Iceland, but due to the increasingly loud criticism of whaling, the overall attitude towards whaling has changed in Iceland. Instead of catching the whales, now, the old ships bring tourists to the fjord to watch the peaceful giants. Over 20 species of whales come to Skjaldfandi Bay to feed, so the chance of seeing a whale is comparatively high. If you want to learn more about whales, you can visit the whale museum in the small harbour town. Here, in addition to detailed information about whales and the whale skeletons on display, the path from whaling to whale watching is described in more detail. Another attraction is the wooden church in the centre of the town, which was consecrated in 1907.

The next stop on the Diamond Circle route is the horseshoe-shaped Ásbyrgi-Gorge in Öxarfjörðu in the middle of Vatnajökull National Park. Scientists say that the gorge was formed by water flowing through the 3.5-kilometre-long Jökulsa a Fjöllum river about 10,000 years ago that has ground away the rock, but the Icelanders also have a legend about the origin of this magical place. Sleipnir, the eight-legged flying horse of the Norse god Odin, is said to have accidentally touched the earth with one of his gigantic hooves during a flight, leaving the Horseshoe Gorge as an imprint. The gorge is still referred to as the capital of hidden beings, and it is said that elves and trolls still live in Ásbyrgi today.
In the gorge, right at the beginning of road 861, there is a small visitor centre where visitors can get information about the national park and buy a few small souvenirs. If you continue along road 861, you will come to the large campsite in the middle of the gorge, which is an inviting place to spend the night. 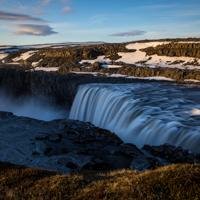 With a flow rate of about 200 m³/s of water in summer, Dettifoss waterfall is one of the strongest waterfalls in the whole of Europe. It is located only 30 kilometres from Ásbyrgi Gorge in the northern part of Vatnajökull National Park. With a width of 100 metres and a height of 45 metres, the waterfall is the largest in a whole series of waterfalls nearby.
Dettifoss cuts the river Jökulsá á Fjöllum at a very specific angle, which means that viewers have a completely different experience depending on which side is visited. Those coming from the west on the paved road 862, have to hike 15 minutes over desert-like terrain first to reach the viewing platform. But the hike is sufficiently rewarded with a breath-taking experience when you are at head level with the waterfall and can feel its power. The other side of Dettifoss can be reached via gravel road 864. From the car park, it takes 10 minutes to reach the viewing platform. The view of the waterfall is particularly beautiful in the morning when the sun illuminates the spraying water from behind and makes rainbows appear.

Lake Mývatn and the surrounding area 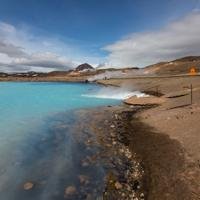 Last but not least on the Diamond Circle route is Lake Mývatn and its diverse surrounding attractions. The lake was formed more than 2,000 years ago by an eruption of the Krafla volcano and is especially known for its many midges that besiege visitors. Nevertheless, one should not be deterred from visiting this beautiful place. The diverse landscapes and extraordinary forces that have shaped this place are truly worth it.
On the southern shore of Mývatn, it is worth to hike to the spectacular pseudo-craters Skútustaðagígar, which offer a fantastic view in all directions and which are home to several bird species such as various duck species or the hunting falcon. The craters were formed thousands of years ago by an underground gas explosion and are now protected as a natural wetland.
In the east of the lake, you can swim in wonderful warm springs of the Mývatn Nature Bath directly next to road 1 and admire the great view and even the northern lights in winter. In addition, the Mývatn Nature Bath is a great alternative to the Blue Lagoon in the south of Iceland and also cheaper. 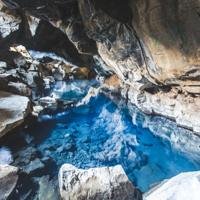 Our recommendation: There are several caves around the lake that can be visited. These include Grjótagjá, a cave with a small lake (note that although the lake was a bathing place in the 18th century, it is not only now too hot to swim in, at 60 °C, but it is also forbidden to swim in it) and the lava ice cave Lofthellir.

For those who want to see more in the North of Iceland besides the attractions already mentioned, we recommend the following fantastic places:

A wide range of excursions to the highlights of the Diamond Circle can be booked directly with us - just contact us! For more ideas, take a look at our other excursions.