If you have ever wondered what the Golden Circle is, how it got its name, and what its must-see spots are, we’ve got all the answers for you.

First of all, the Golden Circle is the most popular tourist route in Iceland, and it covers a lot of great places and natural wonders of the island that are worth a visit. The Golden Circle (or "Gullni hringurinn" in Icelandic) got its name, because of the route from Reykjavik to Thingvellir, Geysir, and Gullfoss, which are the main attractions of the country, and which you can visit while driving back to Reykjavik. The Gold in the name derives from the waterfall Gullfoss, which literally means “Golden waterfall”.

The main attractions we want to introduce to you are the Thingvellir National Park, the Geysir geothermal area, and the Gullfoss waterfall.

When you’re taking a road trip through the land of ice and fire, you will most likely drive along the Ring Road, also called Route 1, which is Iceland’s most famous road. 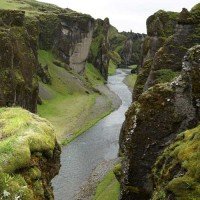 Þingvellir (deriving from the Old Norse, literally meaning "Assembly Plains"), can be described as the birthplace of the Icelandic nation. It is located 40 km northeast of Reykjavik, Iceland's capital. It is the most important cultural sight in Iceland, as historically meaningful events have taken place here. Most of all, Thingvellir is known for the fact that the oldest existing parliament in the world (Althing or Alþingi) was first assembled here in 930 AD. The establishment of the Icelandic Parliament is often equated with the establishment of the Icelandic nation. Its sessions were held in Thingvellir until 1798. The National park was founded in 1930, the 1000th anniversary of the Althing.

Furthermore, the North American and Eurasian tectonic plates meet in Thingvellir and drift further apart each year. This is why the park lies in a rift valley, which is a part of the Mid-Atlantic Ridge. The Almannagjá canyon is a beautiful and visible proof of continental drift since it was formed between the tectonic plates. Frequently, those tectonic shifts cause measurable earthquakes. 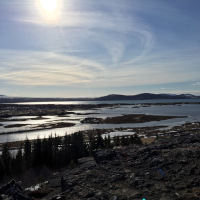 Þingvellir is perfect for hiking tours (on official hiking trails only!), and can be visited all year long. There are sufficient parking spaces close to the park, as well as toilet facilities. You should definitely visit its tourist centre, where you can learn about its history and buy nice souvenirs.

If you like diving, then scuba-diving or snorkelling between the tectonic plates, in the Silfra fissure (or Silfra rift) will delight you! The Silfra rift is part of Lake Thingvallavatn (or Þingvallavatn), the biggest natural lake in Iceland. One more thing when visiting Thingvellir: please DON’T step on moss that you will find all over the park. It takes decades to grow back and must not be touched or stepped on anywhere on the island. 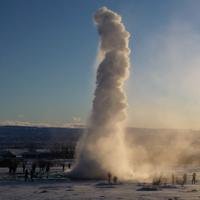 But let’s get to the second place that should be on your Iceland bucket list: the Geysir geothermal area. It goes without saying that geysers are some of nature’s most stunning wonders, and they will leave you in awe! In Iceland, Haukadalur is a valley that is home to geysers and is a very popular tourist attraction. The biggest and most well-known geysers of Haukadalur are Strokkur and Geysir itself, from which the word “geyser” derives. Strokkur is very reliable and erupts every 5 to 15 minutes, but the bigger Geysir erupts only rarely these days. Strokkur sprouts its water 30 m (100 ft) high! In the area of Haukadalur, there are also more than 40 smaller hot springs, fumaroles, and mud pots.

In the Geysir Center in Haukadalur, you can learn about the area and its history, buy souvenirs, and you’ll find toilet facilities, parking spaces, and restaurants nearby.

Last, but not least, you’ll need to make a stop at the impressive and beautiful waterfall Gullfoss, located in South Iceland. It drops 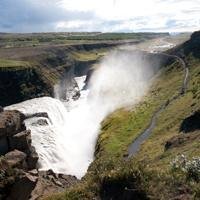 down 32 m in two stages, into a small canyon, with its water coming from the powerful glacier river Hvíta. You’ll most likely be able to walk close to mighty Gullfoss, but always keep in mind to stay behind the fence, and be prepared to get wet. The waterfall can be visited all year long, but some viewpoints might be closed during the winter season. Again, parking spaces and toilet facilities are nearby.

Thanks to Sigríður Tómasdóttir, we are still able to admire the beauty of Gullfoss today. She fought in a legal battle against an English businessman at the beginning of the last century, who wanted to build a hydroelectric plant next to the waterfall, to use its energy. The battle became so difficult that Sigríður threatened to throw herself into the waterfall if construction began.

Other awesome spots that you should visit on your Golden Circle tour are: 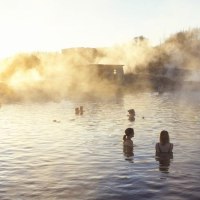 For more inspiration, take a look at our great variety of excursions that you can book directly with us!